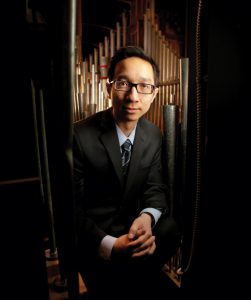 Dramatic classical music soars and swells through the neo-Gothic arches of Norfolk’s Christ and St. Luke’s Episcopal Church. Kevin Kwan’s hands range over the three levels of its organ’s keyboards, pulling out a knob to make the notes ring like trumpets, another to make them trill like flutes, his leather-soled shoes heel-and-toeing over the foot pedals. In a pair of chambers overhead are nearly 5,000 pipes, some 32 feet long and as resonant as ships’ horns, some as small as pencils and as piercing as piccolos.

“Mozart called the pipe organ the king of instruments,” Kwan says, “because it has the widest range of dynamics – from very, very soft to very, very loud.”It’s also a wonder of mechanical engineering, with bellows and pipes and valves that open and close as Kwan touches the keys, letting him play a kaleidoscope of sound. The 50-year-old pipe organ is one of the largest in Hampton Roads, and it plays against the building’s Indiana limestone as if the building itself were part of the instrument.

Kwan, 30, fills that lofty space with music. As organist and director of music, he leads the church’s 45-member, semi-professional choir. He manages its Sacred Music in a Sacred Space concert series and he’s starting a choir of children. He came to Norfolk, where he also lives, in October – only the fifth person to hold the position since the congregation began – after four years at the prestigious St. Thomas Church on Fifth Avenue in New York. There he worked alongside John Scott, an organist so renowned he played at Charles and Diana’s wedding. Before that, Kwan spent a year at Gloucester Cathedral in England, his morning commute a walk through fan-vaulted cloisters so ornate they were used as Hogwarts in the filming of Harry Potter movies.

“They had services every day,” he says, “and that gave me a chance to go head-into-the-water and live that rhythm of life that they’ve been doing for 2,000 years.”

Kwan didn’t even start playing the organ until he was 18. He had started piano lessons when he was a kid, but when he went to the University of California-San Diego – planning to study engineering – he saw a course in organ in the university catalog and asked the professor if it was OK for him to give it a try. From then on he was hooked, transferring bus-to-bus for an hour each way to get from campus in La Jolla to his lessons at St. Paul’s Cathedral near downtown San Diego. After he graduated, he went to the Cleveland Institute of Music, where he earned his master’s degree in music. He then took off for a year of immersion in England that included two international tours with the Gloucester Cathedral Choir of Men and Boys, a live performance on BBC Radio and recitals at cathedrals all over Britain, and in Bath and Westminster abbeys. He was all of 25.

Now he sits balanced on his backless bench, his face content, his hands and feet reaching. He pulls out a knob – called a stop – that opens a valve, directing air through a wind trunk to a specific rank of pipes, this row fitted with reeds so that when he presses middle C it sounds like a softly played clarinet. Other ranks are made of open-throated flue pipes, and Kwan adjusts the stops so every pipe in the organ will get air at once.

He plays one quick, reverberating note that if left long would rattle the stained-glass windows in this 104-year-old church.

Originally published in DISTINCTION, May 12, 2013