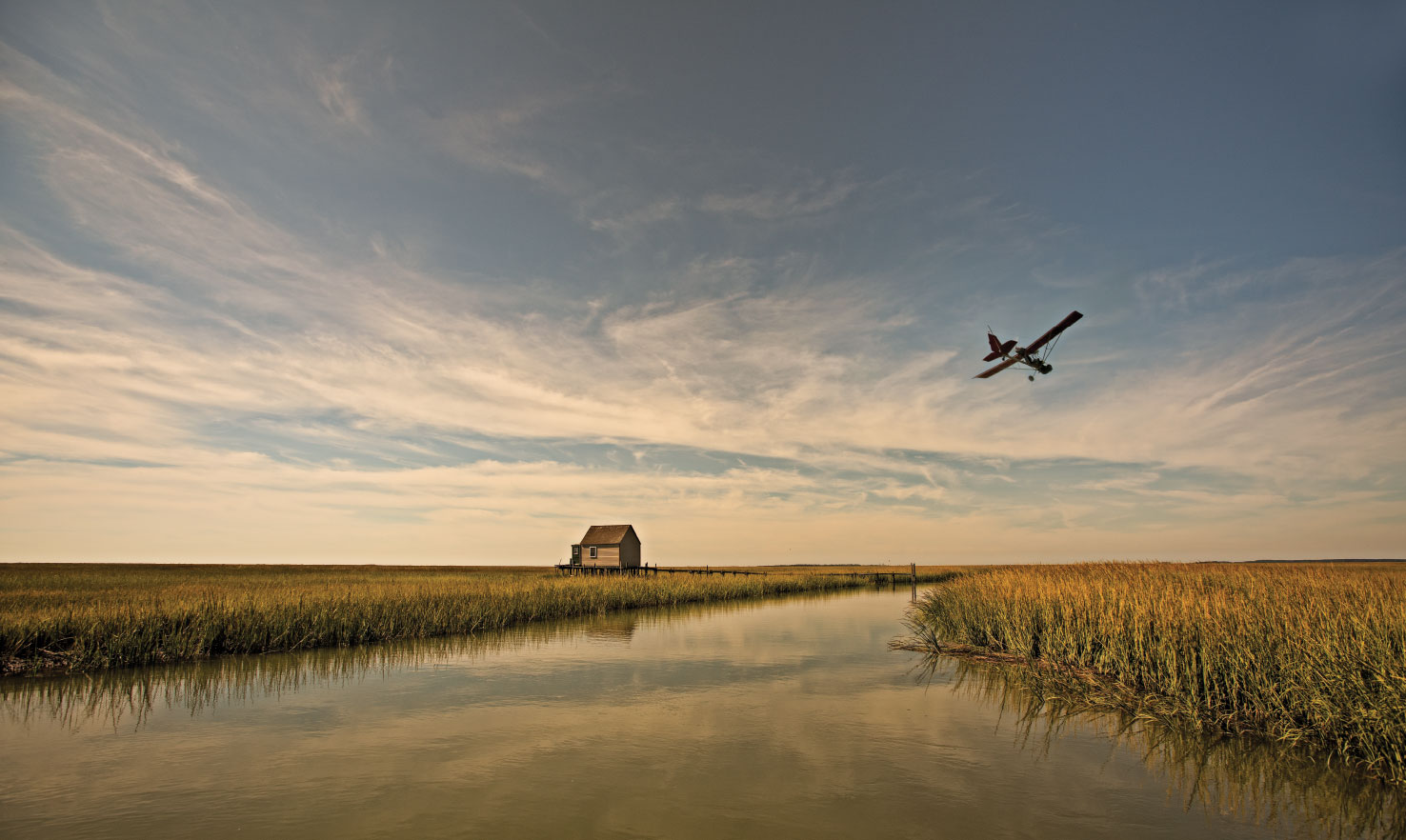 The plane bumps and bobbles across the clover, hurtling along the mowed runway and rising as if it is nothing. There is no fuselage, no windshield, only an aluminum frame with Dacron stretched over the wings, a four-stroke engine and a jug of fuel that pilot Gordon Campbell can see through a convex mirror Velcroed to the strut. That’s his gas gauge, the ability to see that tank. There’s a transponder next to his knee, and a radio that contains a GPS, although he knows the Eastern Shore so well that it’s more of a flight log than a map. In a net sling beneath his feet is a life jacket, in case he goes for an unscheduled swim. Above him is a red handle for a parachute, although it’s worthless below 400 feet and he tends to cruise at treetop level or lower, level with the birds. His long-lensed Canon dangles from a tether in front of his face and as he flies his eyes scan, for the wind-bent grass, the snaking creek, the corduroyed farm fields.

He is an aerial photographer now, and having a blast. Campbell, 51, started a photo finishing business after college, developing prints on $100,000 machines. He opened one-hour developing shops of his own and then divested as services popped up in every Costco and CVS, and the world transitioned to digital.

He learned to fly to escape after grueling weeks of work. It was never about “punching holes in the sky,” as he calls it. “It was rare that I’d fly for the fun of flying,” he says. “I was always going somewhere.”

Born in Manhattan, Campbell grew up in Westchester County, then spent a couple of decades in Greenwich, Connecticut. He became an equities trader there, he and his wife, Christine, logging long hours in the high-stress finance world. Life was fine, he says, but life is also short.

So in 2003 he bought the old Kellam Field Airport on the Eastern Shore, renamed it Campbell Field Airport, painted “Land Here” on its roof and took to the skies, trading his old two-stroke for the more stable four-stroke, all 900 pounds of it dropping and rising as the wind off the Chesapeake Bay hits the trees.

“Flying this is like driving down a dirt road,” Campbell says. “It’s like a kite: It wants to go where the wind takes it.”

He pulled out his camera that first time not to create art but to document the islands along the coast. His Flickr account shows all of them,
geo-tagged by latitude and longitude and sometimes labeled by their colloquial names.

Campbell says he’d like to create a record of the entire eastern coast of the continent, to fly down to the Keys and up into Canada, his spare clothes tucked inside zippered spaces in the wings.

Last year he photographed the Jersey shore, and areas along Long Island and Nantucket and the coast of Delaware, cruising for hours, his feet working the rudder pedals, tilting and turning, his eyes on the viewfinder, on the lay of the grass, the angle of the sun, the pop of color of a metal roof.

This year he’ll capture Charleston and Savannah, and perhaps the Outer Banks.

He flies at about 45 mph, turning as if his plane is a sports car, always jockeying for the angle of a good shot. He snaps constantly, not knowing what he has gotten until he spends those long hours at the computer, cropping only to keep the horizon level, rarely needing to enhance his colors.

His is a career of confluence – of streams and bays and an ocean, but also of circumstance. The plane got better and the camera equipment got good enough that he could make huge, eye-popping prints on aluminum, the surface so strong it can be wiped with Windex, the colors so vibrant as to appear three-dimensional.

For years he gave photos away, selling only a few, testing the idea. He has enough experience to know that it takes five years for a business to thrive, and he’s in no hurry. Not as long as it’s fun.

Last November he opened At Altitude Gallery in Cape Charles in a former dirt-floored shell that now spotlights his table-sized photographs against exposed brick walls. He bought the equipment to print in-house, so he can control for quality.

Already his photos of islands and mist and crape myrtles bright pink against the emerald green of farm fields hang in The Barrier Islands Center in Machipongo. They show the shifting shape of the islands, but also the crumbling chimneys and ruins of what were, in the late 1800s and early 1900s, the hunting lodges and hotels of the nation’s elite. Visitors gape at their detail, says museum director Monika Bridgforth.

“The islands are inaccessible, so having his incredible aerial photography lets visitors see how dynamic they are,” she says. “This is one of the longest chains of undeveloped islands outside the Arctic zone, and his photographs have made it possible to get that story across.”

This is Campbell’s love letter to the Eastern Shore, these photographs, and on a smooth day the flying is like a magic carpet ride. He can lean wide, take his time, circling like a bird on a thermal, clicking away as the mist rises and the sun sets, the shadows lengthening, the reds and blues and golds becoming richer, the only sounds the wind and the steady puttering of his engine. Children run in circles and wave. Trucks pull fishing boats east to the ocean or west to the Bay. Farm workers harvest tomatoes. Oystermen stoop over their tide-drained flats.

He aims for the angles, for the golden hour, the sunrise like fire, the ocean and sky competing for bluest blue.

He’s no longer flying just to get away.

WATCH OUR VIDEO ON GORDON CAMPBELL