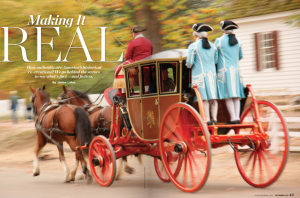 The man who dismounts with a flourish wears a red wool coat and white linen breeches. His shoes hand-made by the shoemaker on site. He strides to his counterpart and bows. She stands stiffly straight in a starched white cap and fetching hat trimmed with blue ribbon, and layer upon layer of clothing — shift and stays, hoops and petticoat, gown and stomacher. Children in bonnets and tri-corner hats stare, ignoring their parents, who are laden with shopping bags of pewter mugs, wooden toys and souvenir quill pens bought in the shops along Duke of Gloucester Street. Some visitors call the place a souvenir treadmill — a Disney park without the rides — but dedication of the people at Colonial Williamsburg to re-creating an authentic 18th Century experience falls cleanly into the category of obsessive.

Every candlestick, every nod of the head, every bayoneted-musket is endlessly studied, in books and paintings, in libraries and museums around the world. The wool for the rider’s clothing is imported from Britain, even though a synthetic would be cheaper and more comfortable in the Virginia heat, because that’s where Revolutionary Americans got theirs. The woman’s stays are made from a pattern drawn from an antique at the Victoria and Albert museum in London, but steel replaces the strips of boiled whale baleen that would have been shoved into the narrow stitched channels back in the 18th Century.

All of the costumed interpreters in the houses and on the streets take classes and immerse themselves in the Colonial Williamsburg Foundation’s library, studying the ways of their characters and the events of the era, both the big and obvious — like the founding of our country — and those decidedly less so, like cleaning clothing and churning butter. The men learn to sit a horse, the women to nod to those socially beneath them and pay courtesies to those above.

But most of the obsession is unseen. In a conservation lab away from the historic area a piano forte too fragile to be played is reproduced, the felt from the keys analyzed for thread count, the wires twisted and hammers carved by hand. Next door a chair is scrutinized – How many chisels did the furniture maker use? What was boiled down to make the glue? How can we repair it without ruining its historic integrity? In another building a zooarchaeologist – an expert in bones – sifts through soil from a recent archeological dig, separating out the chicken from the fish from the mammal, learning or confirming what was eaten by whom at the time, the good fish for the grand, the leavings for the slaves.

That kind of knowledge informs everything that happens within the historic area.

In the wheelwright’s shop the wood for the spokes is split rather than sawn so that the grains align, because generations of wheel makers have learned it makes for a stronger spoke. Wheelwright Paul Zelesnikar is one of only a handful in the country using pre-Industrial Age techniques. When he’s ready he walks to the blacksmiths’ and orders the wheel’s iron outer ring.

The blacksmith, Ken Schwarz, pounds iron on an anvil wearing a sleeved waistcoat whose shoulders are rolled back, the sleeves tight and bent, forcing him into the posture that was fashionable at the time but cramping of his range of motion.

When his bellows get old he’ll go down the way to the leatherworkers’ and order a new cover. The milliners walk to the weaver for more fabric, the silversmiths to the foundry to get castings poured.

Visitors are in the midst of it. Yes, the streets no longer stink of dung and many of the buildings have modern heat and air conditioning, but in the Palace’s replica kitchen the ham that sizzles in cast iron over an open fire comes from one of the few remaining herds of pigs like those eaten in the era of George Washington and Thomas Jefferson, small, round animals with about three inches of fat for every inch of meat. The historic breed comes from an island off Georgia where they likely were left by the Spanish in the 1600s. Each year Colonial Williamsburg raises six to ten piglets from a sow now at Mt. Vernon, which are then slaughtered and butchered off site into the slabs of bacon and hanks of ham that are cured in salt and then smoked, just as they were two and a half centuries ago.

The silver in the historic homes is polished with chalk in a slow, laborious process. The sheen is dim compared to what you’d get with modern compounds, but that’s how it was done back in the late 1700s, so that is how it’s done now. The builders use crosscut saws and make pass after pass with hand planes to create the siding for the armory being built on the site where archeological research shows the forges that made military equipment for the Revolutionary War.

Because of city building codes (and good sense) the roof is lined with sheets of fire retardant, but where possible the joiners use 18th Century pine reclaimed from old buildings, heavy, with tight rings because it grew slowly in virgin forest.

“It has a very different character from the way pine is grown today,” says Master Carpenter Garland Wood, “One of the challenges is to try to find the materials that were available at the time.”

In his pocket is a t-headed nail punch made in the blacksmith shop to align with 18th Century-style nails. Some of the bricks for the chimneys and foundation were reused from old buildings but most were made up the road, the wet clay mixed by foot, then packed into wooden molds and baked in the sun before being piled into a kiln and fired.

“We pride ourselves on really trying to replicate the 18thC products not only so they look like they did in the 18th Century but so we get there the same way, using the same technologies,” says Jay Gaynor, director of historic trades. “The artifacts we are trying to preserve out here are human skills, and I think that’s just as important as preserving the objects and the buildings.”