The Mystery Of Glass 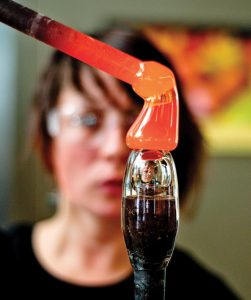 Julia Rogers’ shirt is sweat-stuck to her back. Her long brown hair is tied in a ponytail and her eyes are hidden behind dark glasses that protect them from smoke and sparks and the retina- burning brightness of the torch she’s aiming at a head she’s creating out of molten glass.

She’s gathered a blob of the stuff out of the 2,100-degree furnace and blown into it and spun it and blown more and now she sits at a bench and lays the pipe across its metal frame, one hand keeping the pipe rolling, the other shaping it with vaguely veterinary-looking tools – long tweezers to pinch and pull, wooden paddles to press and shape, shears to cut off any excess. The tools are identical to the ones used by ancient Romans and are still handmade by craftsmen who pass the skill from generation to generation, so in spite of the stainless steel ovens that are gas-powered and controlled using an iPhone, if a medieval glass blower walked through the door he’d recognize everything.

“Blow,” she says quietly to Nate Avery, a glass artist perched on a low, wheeled stool next to the bench. He leans in and blows, rolling left and right to keep up with the spinning pipe, and the bubble grows. “Stop.”

She carries the bubble back to the glory hole – the opening of the 2,100-degree oven – then back to the bench.

“Blow,” she says again. She picks up the jacks and squeezes where the glass meets the pipe. The jacks are lubricated with beeswax so they won’t leave marks, so there’s the briefest hint of candle in the air. She pulls a wooden dipper from a bucket of water and cradles it against the bubble, rolling and rolling, shaping it to a perfect orb. The glass is riding on a layer of steam but still you can smell the burning wood.
The glass studio possesses its own energies, of intense heat and movement of artists and glass:
Liesl Schubel, Robin and Julia Rogers, Heather Sutherland at the furnace, and Josh DeWall.

Her husband, Robin Rogers, the man in charge of the studio’s equipment, hefts the heavy piece and rolls it in granules of glass infused with metal oxides – cobalt for blue, gold for red, iron for green – some as big as coffee grounds, some as fine as powder, then rushes the piece back to the glory hole. Being out of the furnace even this briefly has cooled the glass dangerously – if it falls below 900 degrees it will explode but if he leaves it in there too long it will melt off into the hole – so he stands there – eight seconds, nine – gazing into the fire, the pipe twirling, always twirling.

He returns it to Julia, who spins it, blows air into it, shapes it with a wad of wet newspaper that chars and sparks, presses it from the inside using curved bars with bulbous ends, pushing here to make the nose, along there to make the ridge of the brow, always moving – from the bench to the glory hole, back to the bench, the piece of art always spinning in its defiance of the gravity that wants to pull it to the floor.
Robin and Julia, with Nate Avery, work on an elaborate head – sketched out on the floor– and despite
the 2,100-degree furnace they don’t use gloves. They need the dexterity in their hands.

Back and forth she and Robin and Avery and others go, from glory hole to bench to a device like a drinking fountain that cools the pipe. Stainless steel is a poor conductor of heat, but still, sometimes it gets hot enough to hurt, and like other artists they can’t wear gloves because they need the dexterity in their hands.

They work almost wordlessly, Julia and Robin in charge because it’s their piece, although on another day they’ll be the ones serving as assistants.

“You can work with glass alone,” says studio manager Charlotte Potter, “but you can do so much more with a little help from your friends.”

On this day, the Chrysler Museum Glass Studio is closed to the public, so the artists aren’t performing for their usual noon-hour audience. Instead they’re making their own art, maneuvering around one another for hours in the sweltering heat, chugging glasses of water as they move in a near-dance in this place of industrial fire and primitive tools, of propane torches and of tongs unchanged since Roman days. There’s the acrid smell of burning wood and paper and cork, a blazing furnace holding a kiddie-pool’s-worth of lavalike glass, the modern shine of stainless steel and the primal orange of flickering flame.

“I’m addicted to molten glass,” Robin says, using a butter knife to carve the illusion of veins in the glass skull. “It’s an amazing teacher. It teaches you to be humble, about patience, about letting go, about teamwork and communication. I’ve had so many challenging and enthralling experiences with it. It’s never boring; there’s always something new.”

He holds a wooden paddle to shield Julia’s arm from the sparks.

“Ready to do the ears?” she asks, and they trade places, Robin now pushing out from the inside of the glass head, forming ears that are human and yet transparent. Robin’s been working with glass for 17 years, Julia for 12. She started as his student, then they became business partners and spouses and co-creators of art and a child.
Watcher in the Woods

They and Potter are mesmerized by the mysteries of glass. “It is both liquid and solid, elastic and brittle, captivating and extremely humbling,” Potter says.

The liquid solidity of glass comes from the refusal of its one silicon and two oxygen atoms to behave normally. In predictable substances like water the atoms have a loosely organized, flash-mob structure when they’re fluid but then line up like good little soldiers in precise formations as they’re cooled enough to become solid. In glass it’s more like they just slow down and stop where they are, and in the 3,000-year history of glass, no one has been able to figure out why.

“I think of it as a magical material that has all these dualistic qualities,” Potter says, “and if you are going to choose this as your artistic medium you’re going to play off of that.”

So glass artists make things that look liquid, like they’re frozen in a moment in time, or they play on the fragility, the ephemeralness of it – you can see through it but it’s there, like a memory or a dream.

Across the street at the Chrysler Museum of Art – closed this year for major renovations – there are 10,000 examples, spanning 3,000 years – from ancient Egyptians up to some of the best work of artists today – making it one of the top glass collections in the country, comparable to the Corning Museum of Glass in New York and the Toledo Museum of Art in Ohio. What was missing, though, was the magic of the fluid form – a glass studio where visitors could see the art created live.

The studio had been a dream for decades, says museum director Bill Hennessey, and two things came together to make it real: The bank building next door came up for sale, and the Pat and Doug Perry family made the lead gift that kicked off a $45 million capital campaign for the glass studio, a major building expansion and extensive endowments to secure the museum’s future.

Then a different kind of dance began – between the building and Kevin Kattwinkel, an architect at H&A Architects and Engineers in Virginia Beach, and Eddie Bernard, owner of Wet Dog Glass, in Star, North Carolina, a leading maker of glasswork equipment.

They wanted the ovens under the skylights to take advantage of the light. They wanted an HVAC system that would offset the blazing furnaces and recycle their heat. They wanted three glory holes and nine kilns, and they wanted them to be controlled remotely, via iPhone. They wanted a room for the grinders and diamond saws and sand blasters of the cold shop, and another for the flatwork of fusing and stained glass, because this would be a place where artists would teach and learn. They wanted cameras and big-screen TVs so people could watch, and a space for an audience, so Bernard designed a walkway right through the hood plenum to allow a straight shot from the glory hole to the 900-degree annealing ovens – the coffin and clamshell and cabinet kilns – where the glass will cool gently, over hours, the molecules slowing to a solid.

They fit it all in, and now school groups come to study art and ecology and economics. More than 2,000 students have taken independent classes, and Virginia Wesleyan College, Old Dominion University and the Governor’s School for the Arts send students for credit. World-famous artists visit for weeks-long performances. Recent graduates from art programs get experience as assistants. Performance artists make glass to music or dance as guests eat hors d’oeuvres and drink wine on the third Wednesday of every month.

“Glass making is not just about the creation of an object, it’s about the experience,” Hennessey says, “and they’ve become national pioneers in figuring out how to do these events.”

The next day at noon, Robin gathers up molten glass, blows a puff of air into his pipe and plugs the end with his thumb so his breath can expand up the pipe and into the blob of glowing orange glass on its other end, making a bubble. He blows more and the bubble grows to the size of a basketball, then a beach ball, its walls clear and thin as one a child might make from soap. He blows again and it bursts, and the audience lurches back, startled, as pieces of gossamer glass drift to the floor.

While today’s demonstration is of an elaborate goblet, tomorrow’s may be of a vase or a face or a holiday ornament. The studio has groupies who put on safety glasses and eat sack lunches in front-row seats. It has a mobile hot shop it can tow to festivals and schools.

Working with glass excites Potter, who got sucked into it as an undergraduate, when she thought she would follow her name and go into ceramics.

“The second I saw glass I never looked back,” she says. “Why would you paint mud with glass when you can just use the glass?”
Julia and Robin Rogers, and Charlotte Potter, opposite. Studio creations range from Josh DeWall’s
red-wine goblet to the Rogerses’ Spanish Goat, Busking Cricket.

Robin rushes the glass one last time to the glory hole.

“This is not like other glass studios,” Potter says into her lunchtime microphone. “This is the dance, the performance, and it’s not just going to end like this, with this lovely chalice – we’re going to end with a bang. If you brought a camera, I suggest you take it out now.”

As she speaks the day’s assistant holds up a wine bottle – what Potter calls a fine chianti – and at Robin’s nod pours it into the upright glass. It’s not wine, though – it’s sugar – and the audience gasps as it bursts into shooting flames, and then the goblet explodes.

“We knew it would do that,” Potter says, as the audience applauds.

“Here we’re less focused on the objects that are made,” she says. “They’re just artifacts of an experience.”