Small restaurant. Big taste. So worth the wait.

Steve Marsh holds an octopus by its head cavity and lowers its body into boiling water, blanching the legs to make them tender before he cuts them off and cooks them sous vide in olive oil. Later he’ll throw each on the grill for a quick char before serving.

“Sometimes I get really obsessive about stuff,” he says. “It doesn’t matter how hard it is to do or get, I have to have it on the menu.”

Thus the overnighted mushrooms – chanterelles, yellowfoots and black trumpets foraged from forests in the Pacific Northwest – and the 6-inch fresh sardines he sears and serves over farro topped with shrimp that he pickles South Carolina-style, with olive oil, lemon and fennel.

Marsh, 30, is the owner of LeGrand Kitchen, a 15-seat “finer diner” on north Colley in Norfolk that feels like a good party, the guests close enough to share conversations, the chefs just across the counter and as friendly as neighbors, the sound track a mix of Norfolk music from the ’60s and what Marsh calls “obscure honking saxophone.” The restaurant’s name is a nod to LeGrand Records, the mid-20th century Norfolk record label that launched the careers of Gary “U.S.” Bonds, Jimmy Soul and The Church Street Five. It’s also a play on the restaurant’s small size and Marsh’s French cooking style.

“We’re all about food and rock ’n’ roll,” says Marsh, who is also in the band The Great Dismal Swamis. “I don’t want to be too serious in here. We’re just genuine, normal dudes. We’ll joke around and have a good time with our guests.” 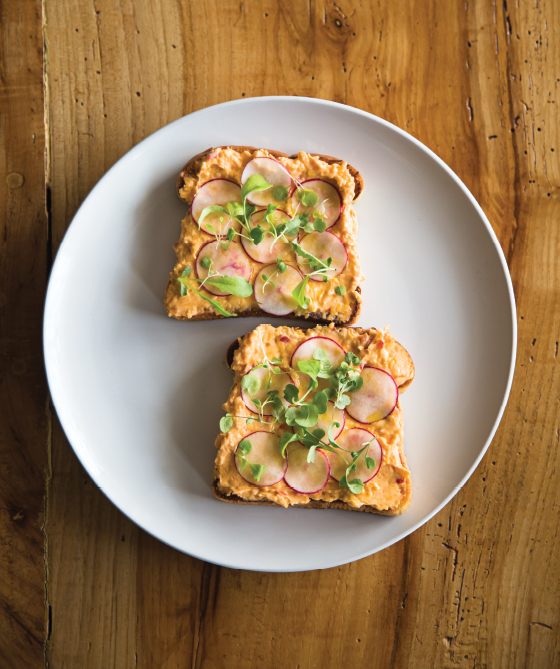 Shaved radish on toasted potato bread adds a nice bit of crunch to classic pimiento cheese.
The restaurant menu changes weekly, and no food is off limits. Marsh’s wife, Andrea Rizzo, handles the non-food duties. She says he makes up the menu each morning, she prints it out, and at 2 p.m. he fires up the grill and starts cooking for customers, without even having tasted his combinations first. He’ll cook livers, cheek, belly and tongue – a particularly humbling cut because you can see the tastebuds, he says, but as delicious as the best pot roast you’ve ever had. “People think our food is exotic, but in other countries it’s normal,” he says. “Every night I have to have a debate about pork belly. It’s bacon, just not cured!”

One night he splashed vibrant beet puree across a white plate, plus pickled cranberries and fennel and orange, all to complement a duck breast. He made his tartare for the night with beef heart, topped with shaved truffles and horseradish, and a sprig of radish sprout grown by his mother.

With all of that, it’s his burger that brings people in. Called just The Burger, it’s composed of two 4-ounce, diner-style ground beef patties, griddled with shaved onions and topped with jalapenos and lettuce that he has tossed in pickle juice, plus Duke’s mayonnaise mixed with roasted shallots, and American cheese – “absolutely the best for burgers” – all on a hearty Big Marty sesame seed bun that has been grilled in butter until it’s crispy around the edges.

“People ask the first time, ‘Does that come with fries?’ ” he says. “I tell them, ‘You’re not going to want fries after you’re done with that.’ It’s a pure, unadulterated burger.

“The burger has an insane cult following. I’ll look at our social media and people will post picture after picture. We do really nice stuff here, but at the end of the day, that burger is making us famous.”

Marsh grew up in a trailer park, his mom growing huge beds of vegetables to help feed the family. When he was a teen they moved to a house in Pungo, where she created even bigger gardens. The family was eating farm-to-table decades before it was trendy.

He got his first restaurant job at age 15, at Blue Pete’s in Pungo. When he was promoted from dishwasher to fry cook he was so proud he bought a chef’s coat with his name embroidered on it. As soon as he was old enough to drive, he took a job in Hilltop at Vivo Cucina, a busy, locally owned restaurant much like an Olive Garden.

“You’re 16 and you love going to work because you don’t know what insanity is going to happen, and you feed that rush,” he says. “It’s going to be mayhem, but it’s fun, too. It’s a very addictive line of work, especially when you’re young and energetic.”

By the time Marsh was 22 he was kitchen manager at Vintage Kitchen, in downtown Norfolk’s Dominion Tower. It was there that he got serious about cooking, reading cookbooks and kitchen memoirs, talking constantly about food. A pumpkin soup he made was featured on the cover of the Best Dish of Hampton Roads edition of Hampton Roads magazine, and every time he saw it on newsstands he got giddy all over again. “Something that came out of my hands was on the front cover of a magazine,” he says. “It wasn’t just a job at that point. I was legitimately interested.”

He left Vintage, spent a year at Crackers, then helped to open Harper’s Table in Suffolk, all while talking about someday opening his own place.

When he first visited the former YumYum’s Heavenly Bakery and Café on Colley near 45th Street, the ceiling was covered with snap-together wood flooring, the counter was a broken pastry case, and everything was dirty and abandoned. Marsh could see it, though – a vibrant local hangout with good, creative food.

He rolled up his sleeves. A friend offered him planks of pine reclaimed from a Civil War-era home in Pungo, and Marsh spent a full week sanding and varnishing, creating LeGrand’s striking countertops. He covered the ceiling with faux tin tile, bought new appliances and painted the walls, all the while refining his vision as he worked.

“I knew when I had my own place I wouldn’t wear a chef coat,” he says. “That doesn’t ensure the talent of the chef, when he puts on that coat.”

The food would straddle innovation and down-home staples. His mother would deliver much of the fresh produce and eggs. The menu would change weekly, but some things would stay – like The Burger – and others would be riffs on dishes he’s eaten elsewhere. So he once bought a mess of pigs’ ears, preserved them confit-style in fat, then seared them whole into crispy delicacies. He got the idea from Publican, a Chicago restaurant, where they were sliced thin and thrown into a fryer, but Marsh deliberately does not have a fryer in his restaurant. That requires him to be more creative and makes his food more healthy.

“Everything’s been done, in cooking or music or anything else,” he says. “You just have to make it your own.” Like that burger. hometown.

Originally published in DISTINCTION, May 16, 2015