Out in the Wild

Sweat bees swarmed over Nick Nichols’ hands, sucking the salt off him, deep in the jungles of central Africa. They crawled up his nose and into his eyes. Still he crouched, frozen, his lens on the naive chimpanzees who had never seen humans before. 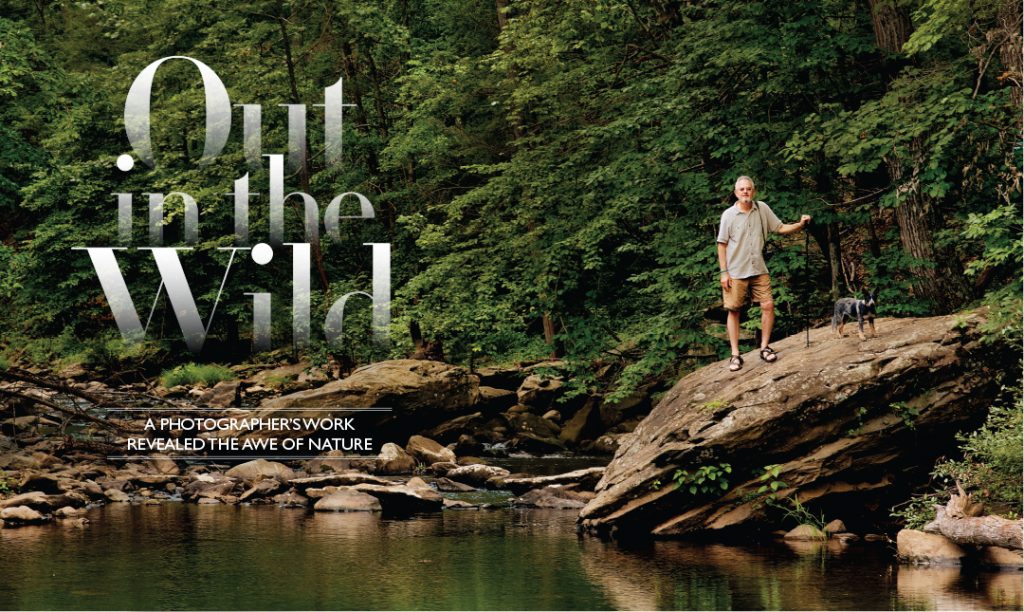 He didn’t know which shot would be iconic, which would tell their story. He just knew he needed to focus.

“I don’t have a lot of tolerance for people who, you go that far and after five minutes they say, ‘Let’s go.’ I say to them, ‘If you sit here, something’s going to happen.’ ”

So sit there he did, as he did throughout a nearly 40-year career. That dedication came with a price. He contracted malaria 20 times. Worms burrowed into his feet and opened bloody ravines that hobbled him. Hepatitis landed him in a hospital in Liberia, holding on to the hand of Jane Goodall’s son, his mind psychedelic with hallucinations from the feverous typhoid and cerebral malaria that hit on top of the hepatitis.

But he got the famous photos – the chimps, the apes, the elephant teaching her baby how to use her trunk, the poachers with the bloody ivory, the great lions asleep on a kopje in the Serengeti.

Twenty-eight stories for National Geographic, each an investment of weeks and months and years, of blood and sweat and sobbing satellite telephone calls back to editors. This trek across sub-Saharan Africa is killing me, he would tell them. You are asking me to do the impossible.

Still he would do it. 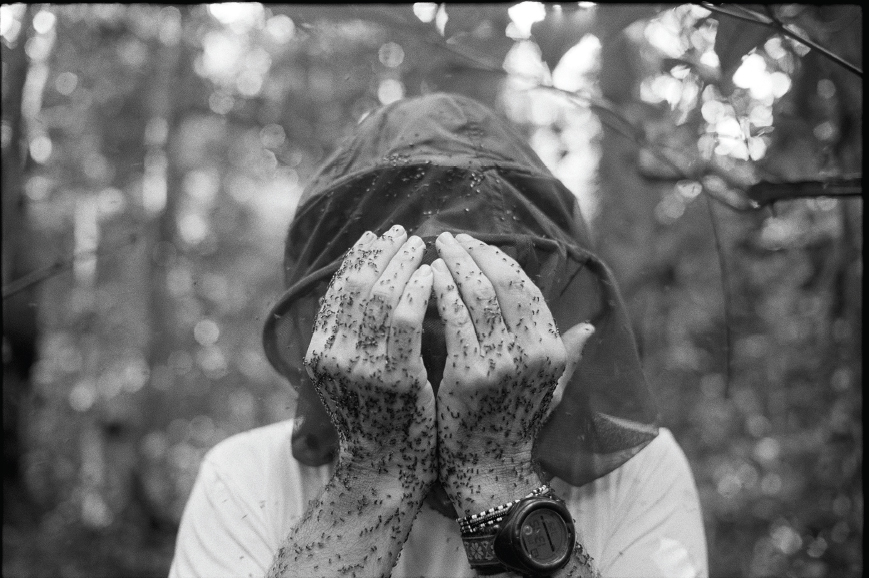 Michael “Nick” Nichols now is 62 – although he says his body feels more like 100. The former editor-at-large for National Geographic lives on an 80-acre spread deep in Sugar Hollow, not far from Charlottesville, where in June the Look3 festival wrapped up its eighth year. What Nichols started in 1988 as a backyard party has turned into one of the best photography festivals in the country.

Now he sits on a rock above a stream, the wind in the pines, water dripping from the ski pole he used to manage the slippery wade, jokingly calling to the children below to get out of the water, to stop having fun, much as an old man will yell “Get off my lawn!”

He was supposed to be here earlier, this restful retirement. But then his editor asked him to help set up a shoot for the 100-year anniversary of Yellowstone National Park. And, in the process, help, maybe, improve the lives of the bison and wolves who live there.

“He knew if I saw it I would do it,” Nichols says. “I went out there and then I called Reba and said, We’re moving to Yellowstone.” They spent 15 months there, he and his wife, the artist Reba Peck, holed up all winter – sometimes in a tiny silver Airstream – their food ordered over the Internet.

“Yellowstone ties it together for me,” he says. “To come back to the U.S. after being so exotic for so long, to finish in Yellowstone, I was pinching myself all of the time, how can I be paid to be here, to be forced to focus like this on something that sums up my existence?

“Ninety-nine percent of what we do is entertainment, but every now and then something happens, and that makes you feel like king of the world,” he says. “I’m not an activist; my pictures are activists.”

His career began in caves. Nichols had been drafted toward the end of the Vietnam War and chose three years as a stateside photographer over two as an infantryman. He was so ashamed of the uniform that he would hie away on weekends to the caves in his childhood state of Alabama and the limestone caverns of Tennessee and Georgia, and later to Mexico. He’d use his buddies as assistants, each of them rappelling down ropes dangling into the darkness, making photos using magnesium powder flashes like Matthew Brady did during the Civil War.

The technique was remarkable, says Shannon Wells, a University of North Alabama photographer who went to college with Nichols and remains a close friend. He figured out how to pre-focus his 4-by-5 graphic camera, chose the right f-stop, then had assistants rappel down and light off the flash powder at intervals, creating one even exposure.

“It was a total beautiful perfect exposure all up and down the shaft of this cave,” Wells says. “That technical expertise and image is what got him hired with Geo.”

He was in college in Alabama in the ’70s when the great civil rights photographer Charles Moore returned to his hometown for a visit and told Nichols to forget grad school, to come instead to California and be his assistant.

Nichols traveled west, scooping up his beloved Reba on the way.

His break came in ’79, when a colleague told him to show his work to a European magazine called Geo. Nichols had never been on an airplane, but he flew to New York for the chance – “With my Alabama accent the taxi was just driving around in circles,” he says. He clutched slides of his pictures of caves, of infrared nudes of Reba. He projected them first for the receptionist, then for the assistant director of photography, then for the director of photography, then for the editor of the magazine. Four slide shows in one night, and it led to an assignment: capture the giant vertical cave pits of northwest Georgia using magnesium powder for lighting. He was 25.

Ten years with Geo, Outside, Rolling Stone and Vanity Fair – for which he once photographed Hunter S. Thompson smoking in a strip club. He revered Thompson but hated that job. “I don’t do well with famous people,” he says, “unless I get to know them and I can be myself. I have to go slow and read you, interact, come back the next day.”

It’s the same with elephants and lions. Come back day after day. Drive the same car. Wear the same clothes.

“With the lions, I’m not going to say they accepted us or they loved us, but we became part of their group, their tribe. Some animals will take care of you like family.”

He spent half his time over the course of two years with the lions, in the end capturing the photo that won him Wildlife Photographer of the Year in a worldwide competition sponsored by the British Natural History Museum and the BBC.

Serengeti lions hunt at night, by the dark moon. They sleep right up until a full moon sets, then boom! They’re up and hunting. Nichols and his team would stay back, making sure not to interrupt. He used night vision goggles, bright enough so he could watch but not bright enough for a photo. As soon as the kill was sure he’d move in for the photos. “It was crucial because if they missed the kill, maybe one of the cubs will die,” he says.

“You’re a giant animal and you’ve got to have all of this food and water, so you have to have a giant memory, because if this creek dries up where’s water? There’s always an id elephant, a matriarch, always a female, who will lead not just her family. … You might see Babylon headed with her 50, she’s headed right for the dark cloud, maybe 30 miles away. So you’d have Babylon leading Navajo and the American Indians, the Winds and the Spice Girls. …”

Nichols was guided by a research assistant who worked for the project Save the Elephants, a Samburu – an African tribal pastoralist, a herder of goats and sheep and cattle – who could identify 600 elephants on sight. With him Nichols would watch the elephants’ flow, he’d learn where they were going and when, and then he’d park in the shade of a tree on their route and let them swarm his little open Land Rover. The babies would rub up against it. So would some of the adults. But never Babylon.

“Babylon never warmed up to me,” he says. “All the females – if I would do something wrong, like move the car too close, they’d shake their heads and flap their ears and you feel like, damn it, I just farted in public. It’s etiquette. Gorillas have etiquette, chimps have etiquette. It’s not a Dr. Dolittle thing, it’s paying attention.”

Nichols spent 15 years off and on in Africa, trekking from the Congo to the Atlantic coast of Gabon with the conservationist Mike Fay, who covered 2,000 miles on foot. Weeks in wilderness wilder than most Americans can imagine heightened his senses in a way he can’t put into words, so he put it into pictures – three major stories’ worth that helped prompt the U.S. government to spend $65 million to protect Congo basin forests in five countries and contributed to the creation of 16 wildlife refuges.

He spent months with Jane Goodall, documenting the lives of chimpanzees both in the wild and in captivity, which led to the book Brutal Kinship, copies of which were given to Congress, which then passed the Great Ape Act, requiring that chimps used in the space program and research into HIV and hepatitis be taken care of well into their old age.

He cares deeply about nature. It has been his life’s focus. It will be his legacy.

Wells recalls a time they were together for a friend’s funeral. Nichols handed her a Polaroid of an ape behind bars. It was a famous photo that had run in National Geographic.

“You could see the sadness on the face of the animal,” she says. “Tears welled up in Nick’s eyes just looking at it. He has so much compassion for animals and his whole life has been dedicated to trying to be a savior to the animals, to save the forest, to give them a voice.”