Self Esteem: The Repair Kit

Janine Latus spent years looking for validation in all the wrong places–until the day she discovered it was hers to give all along. 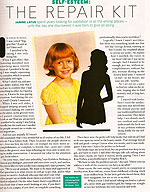 In high school I was voted ‘biggest flirt.’ (Look at me! Value me!)

I justified it by saying I was being fun.

When I got older that clamoring morphed into something more overtly physical, which I justified by saying I was simply expressing my sexuality, which is natural and right and healthy.

What I didn’t say, and perhaps didn’t realize at the time, was that I used sex to confirm that I had something to offer. As I lured him in, I knew he was paying attention. And during the sex act itself? Clearly I mattered.

When I was still older I stopped sleeping around, but I still made eye contact on the street, in the grocery store, as I passed construction sites. (Look at me! Find me attractive!) I justified it by saying I was just being friendly, but the truth was, I needed the people around me to make me feel important.

And not just sexually. If I wasn’t told constantly that I was wonderful in all realms of my life, I fell into an I’m-a-failure funk. Then I pestered the people closest to me – love me love me love me – or trumpeted my most minor of accomplishments, or complained to friends that – poor me! – some man at the grocery store kept following me from aisle to aisle, trying to make conversation. I measured my value by the attention I got from others.

“In some ways, that’s not unhealthy,” says Kathleen Brehony, a clinical psychologist, personal and executive coach and author.

“Everyone likes to have a reflection coming back that’s positive,” she says. “We’re social animals, we want to be liked and approved of. The question is to what extent will we go to get that, and to what extent we need it. Anybody who says I don’t really care what anyone says or thinks of me is probably not well liked or adjusted. On the other hand, there’s a problem if you think that if you don’t get these things, if men aren’t looking at you, if you don’t get an A on a paper, if you don’t accomplish something professionally, then you’re worthless.”

Logically I knew I wasn’t worthless, but there was something inside me that felt like George Jetson, running as fast I could, the treadmill about to sweep me under. No matter how I excelled, the voices in my head told me I was never enough. And I wanted to be enough, just me, without accomplishments, without flat abs, without flirting in the frozen food aisle. I wanted to feel – in my bones, my soul, my self – worthy.

So I set out on a quest to find my value from the inside, hoping that would bring me serenity, and at long last, peace.

I started with books. First I tried the intellectual ones that delved deep into the female psyche and our traditional/historical role in society. They didn’t help. I was already much too cerebral and could understand the heck out of this problem without doing diddly for my self-esteem.

Then there were the perky self-help books that told me that all I had to do was open my mind to the beauty inside. That message was all well and good – except I knew what was inside, and it was inadequate. I was sure I had to be perfect to be loved.

The books kept me in my head, but my problem was deep in my gut, and hard to reach. I had done therapy, talk talk talking about this inner chasm, yet there it stayed, needy, gaping. Then I met Kim Forbes, a psychotherapist in Virginia Beach.

“We have to take it outside,” she said, “where you can address it with all the resources you have as an adult.”

Those voices, the ones saying I’m not pretty or competent or worthy, were, Kim told me, voices from childhood, echoing, stuck in an endless loop. To the little girl who heard them they were inarguable, but not to me as an adult.

Which is how I found myself talking out loud to a photograph of a sweet little gap-toothed girl, her bangs cut straight across her forehead, her eyes innocent and wide.

“You are beautiful,” I tell the picture.

Kim leans in. “Tell her it’s not her fault. Tell her she is loveable.”

I struggle not to roll my eyes. I am the anti-woo-woo, the confirmed skeptic. Still, I repeat her words.

“You are loveable,” I say, feeling foolish. Then I get mad.

“How can anyone have told her she was stupid, fat or ugly?” I ask. “Look at her!”

The photo is of me, of course, at age five. I am wearing the yellow dress my mom had made. Kim and I are doing an exercise designed to separate my intellectual side from the emotional, and allow the former to comfort the latter. The picture is supposed to represent my emotional side, the one that has been bruised and quashed and never made to feel important. It’s Kim’s theory that both sides have to be acknowledged in order for me to feel mentally well.

In spite of my internal eye-rolling, I do it.

I say it out loud, awkward and artificial as it seems, and tears well up. It feels hokey to be talking to a photograph and to cry, but there it is, a deep swell of feeling spouting up, a realization that it’s true, that that little girl is enough, just as she is, without accomplishment, without successes, without even trying. And that little girl is me.

I leave the session somewhat drained.

I grew up in a big Catholic family, my parents scrambling to meet everyone’s needs in spite of erratic income and their own parents’ stilted parenting. Their expectations were high, in hopes, no doubt, of helping us succeed. But the message I grew up with was ‘you’ll be good enough if ….’ The ‘if’ was different, depending on who was doing the messaging, but it was never just ‘you’ll be good enough,’ or – more unlikely — ‘you are good enough.’

So the next day I draw my living room blinds, prop the photo on a chair and clear my throat, feeling utterly goofy.

As I speak I think of my own daughter and the effort I have put into making her world a place where it is okay to have fears, to cry over boo-boos, to believe someone else is taking care of the big picture. I think of how I hold her and tuck her in, how I brush back her hair and laugh at her stories. I hope she’ll grow up knowing she’s enough.

Even as I form the thought I feel a swelling of hope for myself. Maybe I need to do that for me, silly as it sounds. Tuck myself in, tell myself I’m worthy, laugh at my own jokes. Maybe that little girl with the trusting smile is going to be the one who heals me. I open my eyes and look again at the photo. This time, though, I’m talking to myself, the grown up version.