On the Eastern Shore, the Lewins carve, bend and paint so folks can sit in comfort 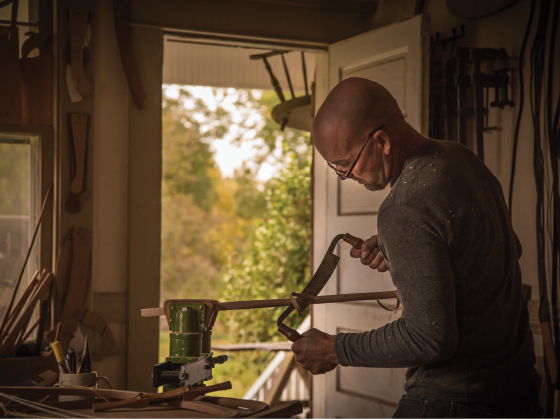 Kurt Lewin pulls the drawknife toward himself, and oak shavings fall to the floor. He alters the angle and pulls again. Thousands of times a day he will do this. Draw and adjust, draw and adjust. Loosen the clamp, rotate the wood, begin again, shaving each hard oak spindle down to a tapered three-quarter inch and then tossing it onto the radiator to dry. Nine spindles per chair, two chairs per week, 14 years so far.

He knows this wood. He’s watched it grow, helped take it down, loaded it onto his portable sawmill and cut it into planks. He stored it in stacks in the wall-less shed next to the stone barn out on the family’s 500 acres, 15 minutes of whitecaps and swamp and open farmland up the Eastern Shore from the Chesapeake Bay Bridge-Tunnel. Here there are piles of walnut, pine and hickory, of cedar with clinging bark, and Kurt knows how each will split under his hatchet and carve under his chisels, how the wood will steam and bend or accept the hard oak staves of the Windsor chair he’s about to make. It’s what he was born to do, to turn a piece of wood from a fallen log into something a family will cherish.

“It’s just wow,” he says, “to take material from the woods, shape it and turn it and carve it into chairs. As soon as we learned how, it became a passion. I just had to do it.”

Finding it, that thing you’re born to do, that tool that feels so right in your hands, and to have the luck of a person who will work alongside you, learning and laughing and loving – that’s how you build a life. For Kurt, that person is his wife, Sally Lewin, who was a freckled 15-year-old he recruited to work in his family’s Long Island farm stand back when he was a senior in high school. They married and had two sons before moving with their families to a farm on the Eastern Shore. They bought a big farmhouse but then didn’t have the furniture to fill it up. The Windsor chairs they wanted were beyond their budget. So in 2000 they traveled to a small town north of Toronto to take a chair-making class from a man named John Robinson.

“It’s something Kurt was made to do,” says Robinson, who says he has taught thousands of people. “He’s a natural with his tools, very skilled and artistic. He sees what he wants to make; then the rest of it comes naturally.”

Since then, Kurt, 51, has made nearly a thousand chairs, sold first out of a workshop at home, mostly to friends who had come for supper and marveled at their comfort. The couple traveled to art shows, too, until their sons got old enough to need to stay in town for school. In 2003 they opened Windsor House near Cape Charles, where they sell antiques Sally finds, whimsical signs she paints and the work of other Eastern Shore artists, along with Kurt’s chairs and tables, to tourists on their way from New England to the Outer Banks or vice versa.

On the back porch of the 1907 house, staves of red oak steam inside an old irrigation pipe hooked to a gas tank full of boiling water. They’ll stay out there half an hour, until their fibers are softened enough that Kurt can bend them around a form and hold them in place with clamps he devised of baling straps and chunks of wood. The work is hard and physical – bending wood around wood and strapping it in place. He shapes one piece for the chair’s arms and another for the crested bow, his hands sure and his wife telling a story about their kids or their friends or their dogs as she paints and rubs and scrapes, finishing his chairs to make them look new or old or worn – whatever the customer wants.

“We have witty conversations,” she says, “and then we go home and have some more.”

As the curved wood cools into its new shape, Kurt lays a 1¾-inch-thick, manhole-sized square of bass wood on his workbench and traces a pattern onto it, marking the shape of the chair seat and the placement of the holes. He saws it out and then lays it on the floor, wedging it in place between his work boots as he chops away at it with an adze, digging a deep saddle. He could use a router or a grinder, but the primitive tool works, and it’s quiet. He scrapes with a compass plane, runs his hand over the surface, scrapes more. Then he switches to a travisher, pushing it along the grain to peel off more fibers. Again he checks with his hand, again he scrapes. Rarely will he use sandpaper – the chairs are intended to look handmade – and his skill with the more crude tools creates a seat comfortable enough for long dinners with family and friends over bottles of good wine.

“So many little things about these chairs, that give them the comfort, that make them look right,” he says. “I didn’t know what was right at the beginning, but after you make hundreds of pieces you feel it, you know how it’s supposed to be. It’s in you after a while.”

In racks behind him are hundreds of chisels, clamps and saws. All of them are nicked, their
handles damaged or replaced. He wraps 220-grit sandpaper around a stick and uses that to sharpen each blade.

There are duplicates of everything, for the chair-making classes he teaches to customers whose eyes light up at the prospect of making their own. He demonstrates, then works on one to sell. In the week it will take them to craft a chair he will have built two, plus parts for more.

His hands know how to turn a log on a lathe into a balanced and beautiful leg, and how to use a brace and bit to drill holes in the seat that will hold tight to those legs, in summer and winter, heat and humidity and dryness, as the different woods expand and contract. He drills smaller holes through the curved arm and slips the spindles through, then taps each one into the seat, their faceted ends digging into the softer wood of the seat and forming a connection so tight you’d have to break the spindle to get it out.

Next he slips the curved bow into the two angled holes in the arms, then stands on a step stool and sights down each spindle to guide the brace and bit as he drills holes in the bow, into which he’ll work the end of each spindle.

There are measurements for arm height, for its slope, for the tilt of the seat. There are other styles, too, of crest and hand rest and foot. For an art show at a beer festival the Lewins designed a drinking stool patterned after a photo of a medieval drinking chair. It’s designed to be straddled, with a flat spot for your beer and a comfortable rail for resting your arms. The legs are carved to simulate a horse’s leg, a style called a hock foot. Sometimes Sally adds a little burn mark on the rail to make it look like someone
was having a smoke.

She uses milk paint, a talcum-fine powder she mixes with water and brushes on, layer after layer, red and green and black. “Some people want it to look brand new, so I’ll layer colors so that as their family uses it, it will wear the way it should,” she says. “They don’t have to know that there’s red and green underneath the black, but it’s there, because I want it to look more and more beautiful as time goes on.”

The paint initially looks chalky, so she rubs it – with fabric and steel wool and sometimes sandpaper, especially where someone would have been sitting or kicking. It doesn’t happen quickly, but eventually the colors get warmer and warmer.

She’s taken torches to chairs before, and once tethered one to a tree and threw it into a pond, turning it throughout the winter to see what it would do to the paint, to the grain. “It raised the grain a little, and turned the paint gross and beautiful,” she says.

“We’ve done it all. Kurt gets nervous when I’m out there playing. It has taken years of mistakes to learn how to make a chair look like it has been around for a while.”

Their earliest chairs are at their home. There are the four Sally, now 49, made when they were starting out, one with a leg that juts at an odd angle. There are tall backs and sack backs, comb backs and fans. All are heavily used.

“At our house we’ve had boys and bands and parties, and our chairs are worn and they look beautiful,” she says. “You couldn’t make them look like that.”

They’ve had a lot of boys and bands and parties. The sign in their music room says “Play.” On another wall hang mandolins and fiddles and guitars. Beneath them is a piano. Sally and Kurt never told their sons to practice; they just asked if they’d played, and now one performs on the Eastern Shore and across the Bay.

In the next room is a long plank table that Kurt planed and sanded and finished, the wood grain glowing. Around it are 10 hand-made chairs, home to friends and family and near strangers. The living room has more tables and chairs, and dozens of duck decoys and bird carvings bartered from neighbors.

The Lewins have built this life, this oasis.

“It’s not about the money,” Kurt says. “Because sometimes you’re doing great and sometimes you’re not. It’s about doing what you want to do, the passion to do it, to take the risk whether you make it or not. That’s the American way, in my view. You get the itch to do something, you gotta do it.”