A River Of Chips 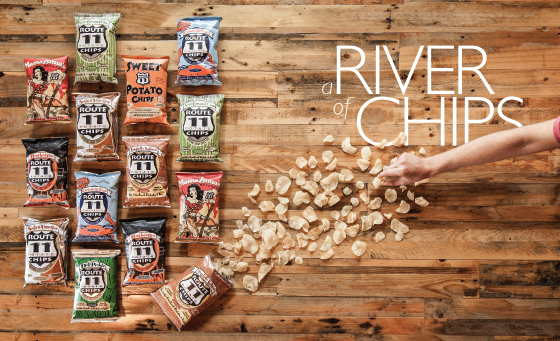 Inside a beige cinderblock building half an hour from Harrisonburg up I-81, 15,000 pounds of potatoes a day thunder down a stainless steel chute and through a chamber where they’re tossed by an auger, knocking off farm soil that is then captured and reused as topsoil for Route 11 Potato Chip employees.

The potatoes tumble into a spinning chamber with sandpaper-like walls that scrape off the skins, the amount of time for a tough-skinned winter crop from upstate New York longer than for thin-skinned spring spuds from the sandy soils of Florida, and different still for the ones that come from the farm of a Mennonite family nearby, the women in bright dresses as they harvest and plant.

The skins are gathered and later fed to a herd of cattle down the road, while the naked potatoes rise up in a custom-made escalator and then drop slickly into the slicer – set thicker or thinner depending on the potato’s provenance. From there they spew like thousands of Frisbees into a vat of 300-degree sunflower oil, where tined paddlewheels churn them into curls and folds, steam billowing as 75 percent of the product disappears into the sky. Fifteen thousand pounds of potatoes in, 3,500 pounds of chips out, up a conveyor, past an inspector and up another escalator to the seasoning table, where they’re sprinkled with throat-tickling habanero or dill or unrefined sea salt. Then they’re shaken onto an electronic scale that drops 2 ounces of chips into each of the bags being formed by the Robag machine below, the making of the bags and dropping of the chips choreographed to the millisecond.

Founder and co-owner Sarah Cohen, 50, grew up in Washington, D.C., which was a much sleepier Southern town back in the 1970s when her parents – unhindered by training or experience in running a business – bought the Tabard Inn, then and still a Washington icon. Cohen’s father was interested in food politics and food philosophy before they were trendy, and in the early ’80s the family started a small farm in the Shenandoah Valley so they could grow organic vegetables for their own restaurant and others’. 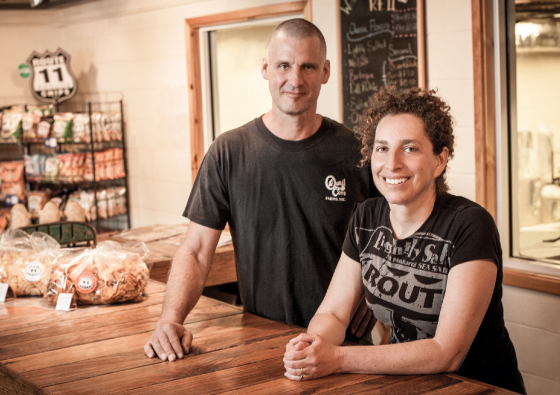 A neighboring farmer had planted potatoes under a contract with a pair of brothers who later were convicted for dealing cocaine.

The potatoes were already in the ground, so her father tossed out an idea: Why don’t we make potato chips?

At the time, she was safely in college in Colorado, far from the force field of the family business, and after graduation she returned to D.C. to work as assistant director on a documentary about the history of the White House. For two years she ran around the White House, trying to keep the director and crew happy, but then the film was wrapped, her job was over, and she was once again working at the Tabard Inn.

Then her parents started yet another venture – this one an oyster farm on the other side of the continent, 3½ hours from Seattle – and Cohen drove with her best friend and her younger brother to do reconnaissance. Cohen and the friend stayed, for a year living on a sliver of land in her parents’ new purchase, a cinderblock hotel named the Moby Dick. Her days were determined by the tide tables, under constant threat of tsunamis as she cultivated and gleaned oysters to send back to the other Washington. Each order home included six dozen for one of the restaurant’s dishwashers, a fact that caught in Cohen’s imagination.

“Oysters had the luxurious connotation, an indulgence,” she says, “and here was this dishwasher…”

She came back to D.C. and with a friend filmed her own documentary, a short black-and-white film about that dishwasher called Oyster Guanaca, the latter word Salvadoran slang for “watermelon eater.”

Cohen did not intend to get sucked back into the Tabard gravitational field. She wanted to return to Washington state, to the man she had met there. She wanted to finish cutting and splicing and editing her film. But then her parents bought a tiny potato chip factory in a strip mall in southern Maryland and promised Williams-Sonoma 6,000 tubs of Tabard Farm Yukon Golds. The Cohens asked their daughter to help.

Cohen didn’t know how to run a factory. She didn’t even like potato chips. Her earliest food memory is of biting into a ball of salt in the middle of a potato chip blister, an experience that made her a pretzel person forever. Yet she agreed to put her movie project and her man on hold and give the project a year.

“You almost have to not know what you’re doing to go into something like this,” she says now. “If you understood how consuming it was going to be, how much space it would take up in your life, you’d walk away.”

That was 25 years ago. That first factory made only 60 pounds of chips per hour – “any smaller and you’re doing it in your house” – but it came with a chipper, a man named Chris Miller, who had a recipe and just enough information to get the job done. Together they fulfilled the order, and when Williams-Sonoma promptly re-ordered, Cohen gave up on her Washington state dreams. She liked making something tangible that she could actually see people enjoy, but she wasn’t willing to do it in a suburban strip mall, so in 1992 she and Miller loaded everything onto a Ryder truck and moved to an old feed store in Middletown, Virginia, deep in the Shenandoah Valley, the building long and low and just off Route 11.

“It was a romantic location, totally inappropriate for food production,” she says, “but it had a lot of charm and a history of being the home of successful businesses, so it had good karma.”

It didn’t have a loading dock, though, so the partners created a conveyor system to bring in the 1,300-pound loads of potatoes and the 2,100-pound vats of oil. She worked part time in a pizza place and Miller worked in a restaurant kitchen, and the family business provided a small subsidy.

“We were young,” she says, “and we were going to make great products and do whatever it took to make things work.”

Their feed store had wooden floors. Their chip-making machinery was from the 1960s and ’70s. They used a garden rake to stir the potatoes in the hot oil. At first they didn’t have a packaging machine, so they sold only to restaurants and to people who came to the store for the novelty of watching through a window as their chips were made. Five years later Cohen and Miller built a new building, one with an actual loading dock and a concrete floor. They bought a packaging machine that had been built in 1964, the same year Cohen was born. It looked like an alien space ship from Lost in Space and was the Cadillac of its time, Rube Goldberg-esque in its workings and held together by bungee cords.

“It was all do-it-yourself. There was no capital investment money,” she says. “We were just on this weird little potato chip journey. Most normal business people would never have put up with it – they want their return now – but Chris and I weren’t the most conventional business people, nor is my family, so no one was telling us how to do it. I had no formal business training other than growing up with unconventional family business.”

It took seven years for them to make a profit; by then they had 20 employees. Miller left to start his own company, but Cohen kept churning out the chips. In her spare time she also finally finished her film, which in 2002 won an honorable mention in the Slow Food on Film Festival in Bra, Italy.

That was also the year she added what she calls the company’s secret ingredient – Michael Connelly, an ex-Army intelligence man, musician and Mr. Fix-It she’d met in a bar when he was playing in a band. She showed him her factory with pride.

“Friends who had seen it had always said, ‘This is so neat, this is so cool, this is the cutest little factory ever,’”Cohen says, “but Mike said, ‘Wow, quite frankly, Sarah, you have some issues here you should be addressing.’”

He talked about flow, about moving product in one direction and not making the machines do the extra work of fighting momentum. She hired him and he started rebuilding every piece of equipment in the place. With everything working they were able to start a second shift. After 12 years in business, Cohen could finally start paying herself a livable salary. 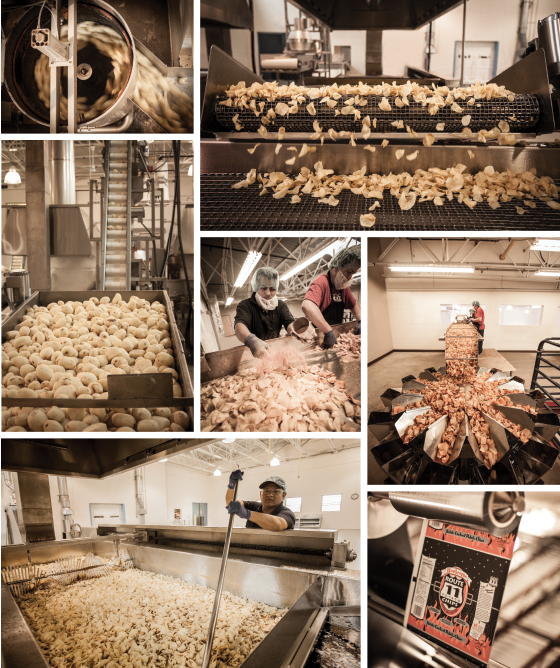 In 2007 Connelly became a partner, and in 2008 they bought 10 acres in Mount Jackson and spent a year designing and building their current facility. It faces south to take advantage of winter sun; its white membrane roof deflects summer heat. It has open-span construction so that there are no posts or pillars to make it harder to mop, because Connelly is fanatical about cleanliness. They worked 12-hour days, seven days a week, pulling wires and assembling equipment themselves, much of it custom-made by Connelly, now 47, who’s been building things since he was a kid and who is teaching his 3-year-old daughter to do the same.

“I came up with uncles and old guys who did everything from floor covering to being electricians, so there was a chain of information,” he says. “Technology has changed, but everything still works the way it used to – physics is still physics – but you get these big knowledge gaps because people don’t have hands-on experience anymore.”

Connelly set up their system in a straight line, a river of chips that starts at one end as a potato and ends 15 minutes later in bags.

“In the old place everything was herky-jerky,” Cohen says. “I’d read manufacturing magazines and they’d talk about flow and I didn’t even know what that was.”

Today they have 32 employees making nine flavors of chips, plus the seasonal Yukon gold Tabard Farm chips, as a nod to Cohen’s family.

Even in the slow season chips go from potato to out-the-door within two weeks, and in the summer demand is so high that the bags are sometimes still warm when they’re loaded onto trucks headed for high-end grocery stores and corner mom-and-pops across the country.

In Tidewater, they’re available at Taste.

“We very much respect Sarah and what she’s done in growing her business and doing it on a values-driven basis,” says Jon Pruden, co-owner and president of Taste Unlimited. “A number of factors went into our decision last year to eliminate other brands and focus solely on Route 11. It’s a superior product that’s Virginia-made, and we’ve had huge success with them.”

Cohen and Connelly are intent on going beyond just making great potato chips to also improving the lives of the people around them.

Thus the broken and imperfect chips are fed to local cows and the 3-inch-thick cardboard boxes that hold the bladders of oil are donated to the booster club of the local high school, which recycles them and uses the money for gear and travel. The used oil from the fryer heats the factory’s maintenance shop, and whatever is left is sold to a man up the road, who turns it into biodiesel. The company’s commitment is so strong that Connelly spot-checks employee wastebaskets to confirm that everyone is participating in the mandatory recycling program. The goal is to create a waste-free facility, and so far they’ve gotten it down to one small Dumpster every two weeks.

As they say on their website, “We also strive to contribute to the quality of life of our families, friends and community, because if we don’t, what’s the point?”