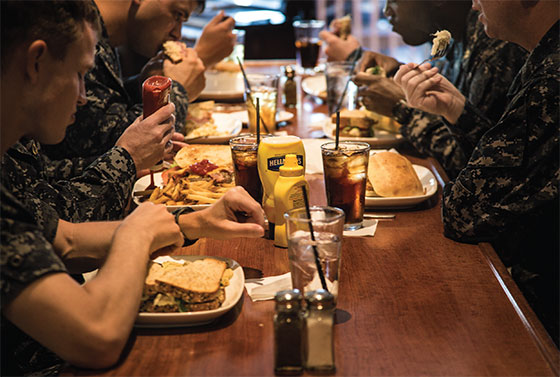 Down at the north end of Colley, there’s a British guy who’s “not your grandmom” –though he and his colleagues sure cook like they are (and love the reaction).

Damian Gordon grins and moves his hands in happiness, showing how he rubbed a lamb roast with garlic and rosemary before putting it into the oven for today’s special. Beside it he’ll serve sautéed string beans, and sweet potatoes sliced thick and rubbed with olive oil and sprinkled with salt and pepper and just a touch of Cajun heat, all of it drizzled with a marsala gravy.

Gordon is the Southern grandmother creating the specials and cooking the enormous meals served at Chow, the comfort-food restaurant that opened in December on the north end of Colley in Norfolk. Except he is neither Southern nor a grandmother. Gordon, 32, grew up in London, a blend of Jamaican and English blood. Yet his chicken and dumplings is created Deep South style, the broth made of cooked-down chicken carcasses, plus onion, garlic, carrots, celery and potatoes, all simmered together until the gravy is thick and rich. 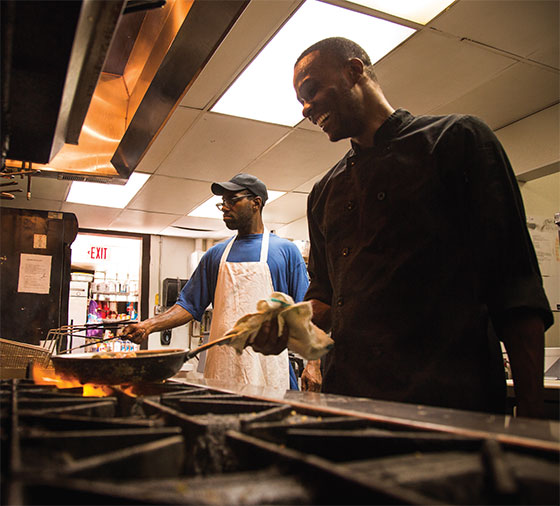 Out front, Stephan Stockwell greets a customer from behind the bar. “Hello, miss,” he says to the middle-aged woman. Stockwell, co-owner and general manager, is 32, trim in jeans and a snug T-shirt, his arm tattooed in honor of his father.
His Triumph motorcycle is parked outside. “First time here?”

It is, but she knows what she wants – the fried chicken, with a side of the restaurant’s Yelp-renowned macaroni and cheese and a side of collards, too. And she wants a second order to go, but swap in fries and coleslaw. The restaurant serves between 100 and 150 pounds of chicken a day, dredged in flour and the simplest of spices. It is the quintessential Southern comfort food, especially paired with the collards, here cooked for hours in a broth of smoked ham hocks, vinegar, red pepper and Tabasco. 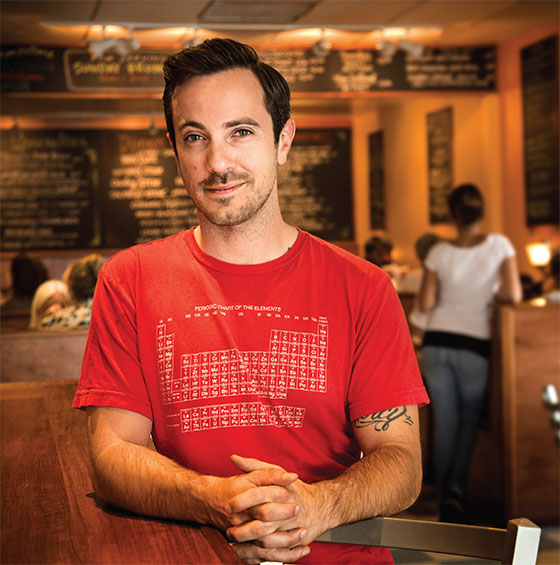 He and partners John Boggs and Tom Pittman, who also own A.W. Shucks and Tortilla West, envisioned Chow as a neighborhood diner, the place to go for the kind of familiar food that leaves you warm, satisfied and full. The influence is heavily Southern, with South Carolina-style pulled pork and fried catfish, but there also are spaghetti and meatballs and crab pot pie, and the PBBB – a grilled peanut-butter-banana-and-bacon sandwich. “Any region you’re from would have something that you grew up with,” says Stockwell, “something that makes you smile when you see it.”

Customers at Chow smile too because the portions are huge. “It’s all about the experience,” he says, “so when people see that plate of food come to the table, their eyes get big and they always make a joke. I love it.”

Back in the kitchen, sous chef Gordon minces fresh rosemary leaves and whisks them into a blend of cinnamon and sugar and eggs and cream. He’s making the batter for today’s lunch special – sweet and savory French toast topped with corned beef, sautéed peppers and onions, and a slice of Monterey Jack.

He comes up with new weekly specials every Wednesday, sometimes not knowing what he’ll make until he gets there, sometimes asking the other cooks for ideas and then adding a pinch of this, a touch of that, creating combinations that wouldn’t occur to most home cooks. 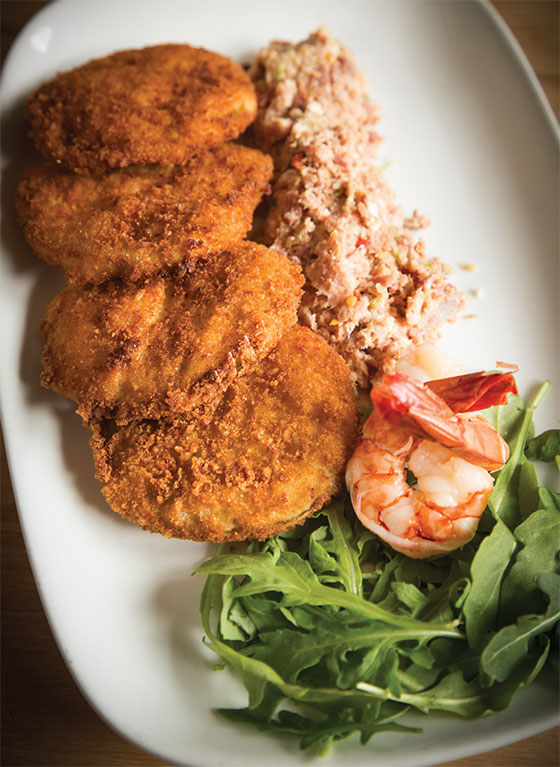 Gordon worked down on the Oceanfront as a cook at Mahi Mah’s Seafood and Sushi while he studied psychology at Old Dominion University. He wanted to be a therapist, but the cooking grabbed him and he went on to study at Le Cordon Bleu Institute of Culinary Arts in Pittsburgh. “You either really love cooking or you don’t like it at all,” he says. “Either it’s in you or it’s not.”

On the Vulcan range behind him is a 4-gallon pot of mashed potatoes, boiled down this morning and blended with heavy cream and butter. They’ll be topped with gravy made of cooked-down bones and vegetables, strained and cooked with a roux.

“It’s amazing!” Gordon says, then laughs along as the restaurant’s dessert chef, Mike Sutherland, makes fun of his accent. 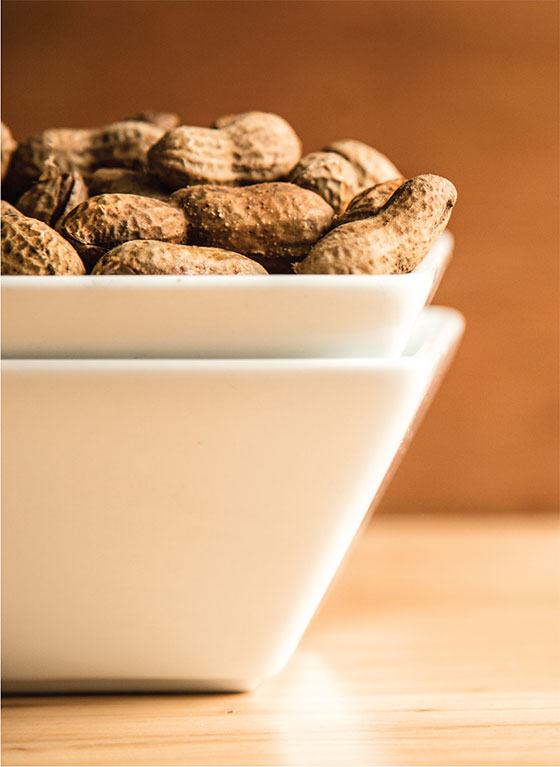 The macaroni and cheese is nearby, rich with cheddar, cheddar jack, smoked gouda and cream cheese. In a jar in the refrigerator are pickled vegetables, high on the chalkboard menu near the goat cheese that Gordon squeezes into a pear shape before rolling it in panko, frying it, and then popping a sprig of mint in the top to simulate the stem of the pear. Sizzling on the griddle are slices of pineapple that will be arranged with strawberries, tomatoes, onions and flat-iron steak over a bed of arugula.

“I love making that salad!” says cook and artist Amanda Janes, who also created the restaurant’s wall-sized chalkboard menus. “It’s like having a little palette to play with.”

In the back room of the kitchen, Sutherland, whom Gordon calls The Dessert King, is working on his peanut butter pie. His favorite is the apple, although his pecan and his bourbon-and-walnut are in high demand – all made with recipes from his Georgia grandmother. 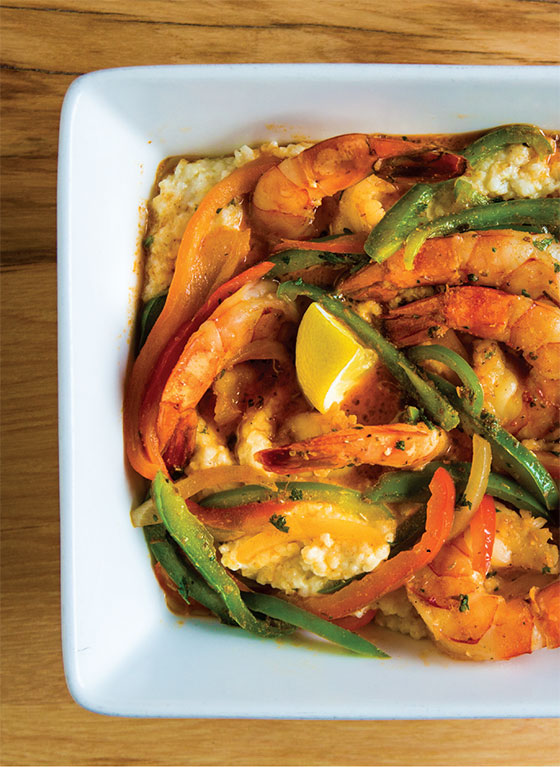 Up front, Stockwell maintains eight conversations at once, his hands always moving, pulling beers from local breweries O’Connor and Smartmouth, pouring the whiskeys that are the bar’s emphasis, greeting customers, often by name.

He came to Norfolk courtesy of the Navy, where he worked in ordnance, a skill set that doesn’t translate easily into the civilian world. So he took a summer job as an ice cream man, tinny music and all, and loved it. “Growing up, we had an ice cream man who knew our names,” he says, “and if we didn’t have money he’d give us little treats, so I have just great memories from that.”

He doesn’t remember the treats so much as the feeling of familiarity and joy, which is what he’s trying to give customers at Chow. “You may not remember the details of your meal,” he says, “but you’ll remember that it made you feel good, and that will keep you coming back.”

Stockwell became a waiter when A.W. Shucks opened in 2005, and from there he eventually moved up to management at Tortilla West. When Boggs and Pittman decided to open a new restaurant they asked him if he wanted in. Then the three of them waited for a space to open up, and then for it to speak to them and tell them what shape the restaurant should take. They settled on the old Tanner’s Creek location, just south of the Colley Avenue bridge. The wide windows told them to go with blond wood and keep the checkerboard floor of blue and white tiles, to give the space a homey feel. Then they asked Gordon, who was working at Shucks, if he’d come do the cooking. 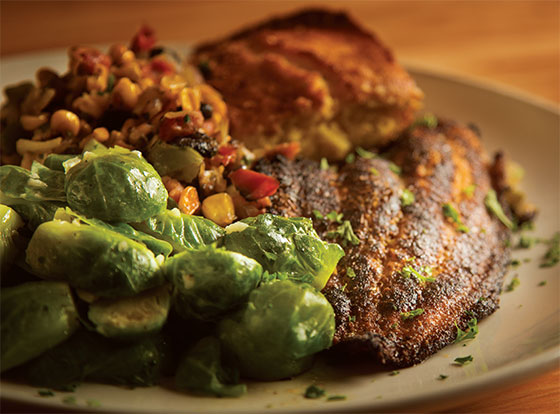 Now he dodges Janes as she lifts the chicken from the fryer while Sutherland reaches for a pan of cream cheese that he’s left to soften for a cheesecake he’s whipping up. Gordon rings the bell to send out another order – pulled pork piled high on a toasted ciabatta bun. Then he pours olive oil into his favorite pot, 4 inches deep and 2 feet across, and begins sautéing a mountain of mushrooms.

“People say, ‘I thought there was a grandma here, someone from the South,’ ” he says, and grins yet again, as Sutherland takes in the British accent and laughs. “I’m sorry,” says Gordon, “but I’m not your grandmom.” 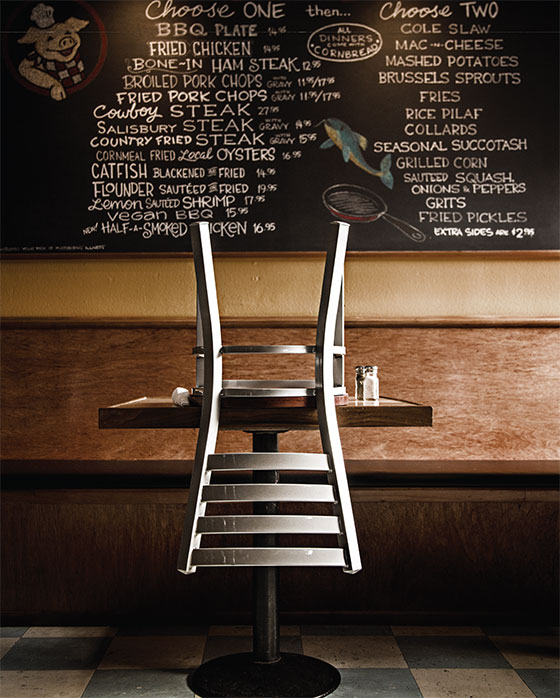