Farming Of The Future 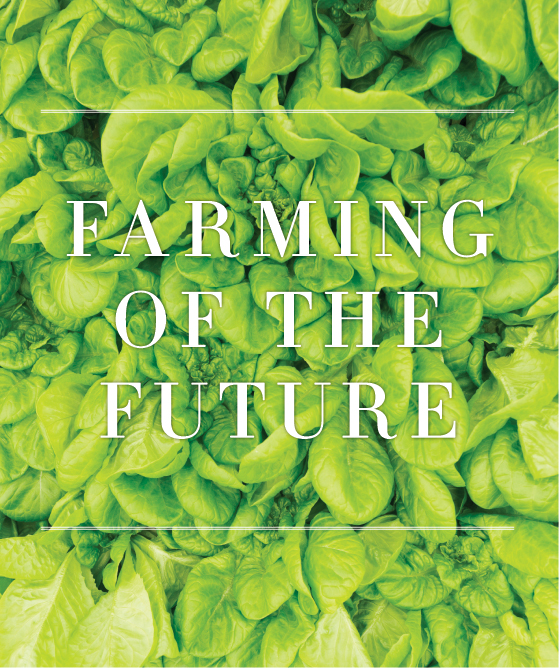 Inside an arched and insulated 60-foot-long building down a dirt road behind Hunt Club Farm in southern Virginia Beach, 8,000 heads of lettuce grow in what its owners call a “plant spa.”

John Pierce and Jacob Gold shuffle their feet through a low tray of disinfectant before entering a control room where a computer controls the transformers that manage the temperature, humidity and carbon dioxide levels in the air, and the conductivity and pH of circulating water. This is command central, the nervous system, the electronic butler that caters to every need of every basil and arugula and lettuce plant in the main growing room – the butter head and butter crunch, and the dark green summer crisp that’s popular with juicers because it’s so nutritious. There are black oil sunflower sprouts whose 7 grams of protein per ounce make them perfect for vegans, and herb-quality arugula so peppery it’s used only as a spice. All of it is grown from organic seeds.

Pierce and Gold, lean and health-conscious, are co-founders of Vertical Acres, a high-density hydroponic system they believe will change the way the world grows food.

Gold, 39, and Pierce, 48, spent 15 years as contractors, together and separately building high-end homes, restaurants, boats and horse barns. Gold worked for Pierce and then Pierce worked for Gold, and all the while they talked about starting a business that would matter.

“We wanted to find something with a purpose,” Gold says, “something that would fulfill us and improve the world.”

Then one day Pierce read a copy of Urban Farming magazine, and he called Gold.

They would produce food, and do it in a way that used no pesticides, almost no fossil fuel and only 1 percent of the water used in traditional farming. Their food would be nutritionally dense and far more flavorful than that found in a field, and it could be grown anywhere – on a yacht, in a mansion, on the edge of urban blight, in the middle of an African desert, inside a shipping container.

It would be grown in the midst of its consumers, so minimal petrochemicals would be spewed into the atmosphere in the process of planting and harvesting and transport.

Hydroponic growing systems have been around for decades, most with rows of tubes of water carrying the equivalent of soluble multivitamins – everything the plant needs delivered directly to its roots, to create foods that the USDA says are 40 percent to 70 percent more nutritious than those grown on a factory farm.

But Gold and Pierce had an idea that would let them produce eight times as much food in the same space: They would suspend horizontal tubes of plants one above another, 10 high, and hang those racks from a mechanized track that would allow them to push rows together for dense growing and pull them apart when it was time to tend or harvest. Eight hundred plants would grow in each of 10 sliding racks, the walls divided by curtains of LED lights that hang like love beads in a doorway. 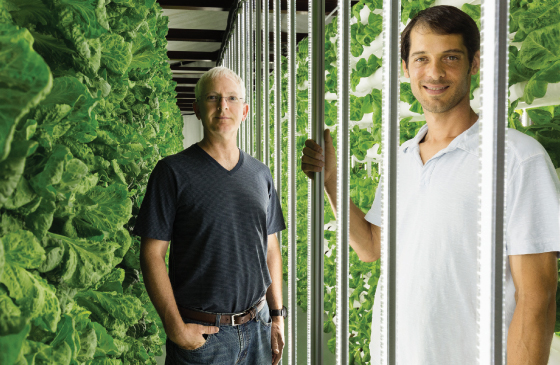 The two took a course in hydroponics led by the Cornell-trained horticulturist Jim Brown, who told them there was no way to make it commercially viable.

“That burned a hole in us,” Gold says.

“He told us we couldn’t do it,” Pierce says, “and we were adamant about proving that we could.”

So they spent $5,000 and four years researching and perfecting a prototype in a garage behind Gold’s house, experimenting with seed varieties, temperature and humidity. They studied lighting and wavelengths and which caused which kind of growth, and they designed two systems – one for seedlings and one for growing plants, the former blue to encourage bulk and root growth, the latter cooler in both temperature and spectrum.

After those four years of intense study, they signed up to provide lettuce for the CSA Coastal Farms, and succeeded. They had done it. Heads Up Hydrogreens was born, and from that grew Vertical Acres.

In 2013 they began production at their new location, where 550 square feet of growing space produces 8,000 plants a month. That’s more than 14 per square foot, eight times as much as in conventional gardening and six times as much as in normal commercial hydroponic production. If they had a second floor they could grow 16,000; a third, 24,000. The water transpired from the plant’s leaves is recycled into circulation, and the trays of their new system are shallower, cutting water needs even further.

They’re working now to incorporate solar panels for places far off the electrical grid, and the electronics can be replaced by human monitoring, onsite by locals or remotely by Gold and Pierce.

“In Africa they have good water but poor soil, and right now we export GMO wheat and corn, which is enough to keep people alive but not healthy,” Gold says. “This would be real food, grown right there. We want to re-green Africa.”

This is not a pipe dream. Decision makers in Abu Dhabi have shown interest, and there are people in Africa trying to pull together investors. The Vertical Acres system has been chosen for a 400,000-square-foot system in Las Vegas, a pilot project of the Eastern Nevada Food Bank that is designed to grow such abundance it will supply food banks, schools and restaurants, and allow graduate students to study optimal growing conditions and return to the planned satellite hubs in food deserts around the country.

“Because of the volume of vegetables it produces, it is a self-sustaining financial operation that won’t have to rely on outside subsidies,” says James Garza, executive director of the food bank and of Southern Nevada Public Farms.

“Hydroponics has become an up-and-coming agricultural technique. It’s been around for a long time, but it hasn’t been cost-effective. With the vertical density they’ve created, they’ve turned the tables,” he says. “We want to revamp the American farmer and help them get into urban areas with a feasible and economic business model that makes sense.”

Clients who buy the Vertical Acres ultra-dense hydroponic growing system will be invited to the building in southern Virginia Beach for a month to train, not just in how to work the system but in how to market and run the business. 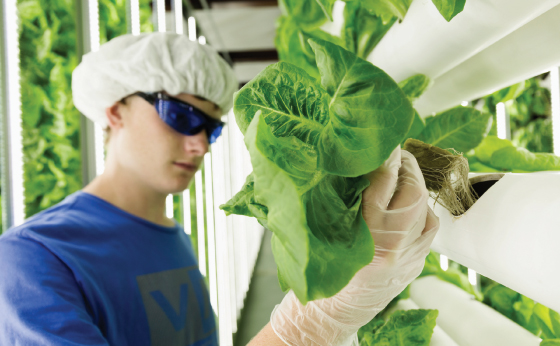 This year Pierce and Gold are adding hydroponic asparagus that will produce stems all year, the temperature of the soil and length of day controlled to keep it from going to frond. They’re building a hydroponic greenhouse where they’ll grow tomatoes, cucumbers and squash, all vining vertically. They’re talking with a Texas billionaire who wants to bring the system to Dallas.

“We’re just two country guys from Virginia, wanting to do something for the good of mankind, to help people feed themselves,” Gold says. “You look at your children and the world they’re going to inherit, and either you can stand by, or you can try to make change.”