Ross Riddle ladles rice porridge as thick as grits from a stainless steel pot, steam billowing. He adds a dollop of butter, then a bit of Virginia breakfast sausage he has dressed up with cilantro and salt, plus sugar and chilies and vinegar, the flavor a meld of Southern Americana and Southeast Asian. He tops that with an egg that’s been cooked for an hour in an immersion circulator set to 147 degrees Fahrenheit, the egg’s texture that of custard. Over that he drizzles a blend of soy sauce and syrup made of hickory bark and sugar, then tops it all with a sprinkling of crunchy fried shallots.

He leans out the window of his food truck and hands the bowl to a customer, then turns and tweezes a frond of fennel atop wontons that he has tucked full of collard greens and Isle of Wight pork, and seasoned with garlic and ginger. These he has steamed in a bamboo basket and is now serving in a bamboo boat.

Riddle, 35, is the owner of Hashi food truck, the name Japanese for both “chopsticks” and “bridge,” depending on where you place the accent. His ambition is to fuse food styles from around the world to bring flavor and comfort and surprise to breakfast and lunch.

“Breakfast needs some love,” he says. “And with the truck I’m not confined by people’s expectations that they can get two eggs any style with bacon and grits. I don’t have to compromise and serve pancakes and waffles like I might with a bricks-and-mortar restaurant. I want to get people hooked on the idea that breakfast isn’t going to always be the same way, that it can be a little healthier but still have that good and satisfying feeling we all crave.”

He pulls out a sushi rolling mat and a sheet of nori, which he heats by waving it over a gas burner. He presses on a mound of Carolina rice, then layers Windhaven Farm’s red Angus beef quickly seared in soy sauce, then asparagus, turnip greens and shredded carrot and homemade yellow beet pickles, plus miso and mustard, the ingredients changing with the season. He rolls it tightly and slices it into mouth-filling bites, the white of the rice perfectly encircling the center of red and yellow and green. The roll is a play on Korean kimbap, he says, with seasonal Southern twists.

Riddle rode his bike to his first restaurant job, back when he was 14 and working as a dishwasher at Tandoms Pine Tree Inn in Virginia Beach. During his teenage summers he worked under Angelo Serpe at Pasta e Pani, where he caught the from-scratch bug that has him buying his rice from South Carolina, his miso from Asheville, his pork from Surry and his vegetables from down the road. During college he worked at Mizuno’s Japanese Restaurant on Laskin Road under Walter Mizuno, who taught him the secrets of sushi and impressed upon him the practice of doing everything just the right way. From there he cooked at Bobby Huber’s Bobbywood, then served as head chef at Todd Jurich’s Bistro.

“Working with those great people developed in me a taste for great food and exploring different cultures,” he says.

He left Jurich’s to become part owner of the short-lived Italian Galleria, then moved on to serve as head chef at Suffolk’s Riverstone Chophouse under Sam McGann.

Then in 2009, tragedy struck. His parents, married 42 years, died within four days of each other. It is his inheritance from them – in both finance and character – that allowed him to open Hashi.

“I feel like they’ve kind of been speaking to me throughout this whole process,” Riddle says. “Everything they instilled in me, even when I thought they were overly frugal, a lot of their voice is in what I’m doing now.” 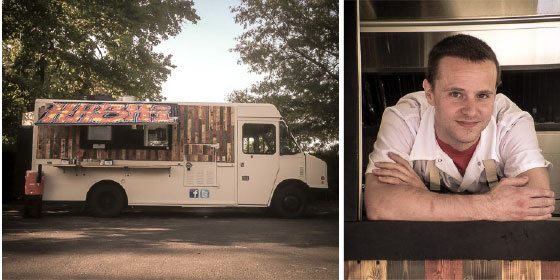 He pickles his own vegetables. He plans to can seasonal, locally grown produce, and has learned from another restaurateur how to make the wakame that he floats in miso soup out of dehydrated collard greens instead of seaweed, a process that will allow him to source even that important ingredient close to home.

He does the prep work in a warehouse space that’s been outfitted like a traditional industrial kitchen, the counters wide, the appliances gleaming. He gets up at 4 a.m. Joel McLendon, 48, whose business card says “Rider of Shotgun,” himself a local chef with experience in Asian-style food, drives up from Elizabeth City, arriving at 5:30 each morning. Together they cut and prep and package, diced tofu here, pickled yellow beets there, the asparagus like pencils in a cup, the shiitakes sprinkled with soy, the daikons sliced and simmered in vinegar. They pack the pans, the plastic packages of prepped food, the knives and ladles and tongs. Each ingredient and implement is placed precisely, for both the drive over and for the later cooking.

Once the truck is in its approved spot – whether in its usual location at the Towne Bank lot at 21st and Cyprus or at another business or festival – Riddle and McLendon’s movements become choreographed within the tight space that grows sauna-like because of burners and steam and the beating of the sun. Still, Riddle smiles. He’s serving fresh, imaginative food made of grass-fed beef and crisp, fresh vegetables from a truck in a Virginia Beach parking lot.